Have you ever wondered what it is like to go Soap Box Derby Racing? There is an early morning start! Race Day begins early as the pits open and racers arrive at the track.  Before we get started everyone pitches in to set up the track.  During this time there is a flurry of activity as the course is swept; cones and barricades are placed; timing equipment, scales, starting ramps, scoring tables and the PA system are set-up. 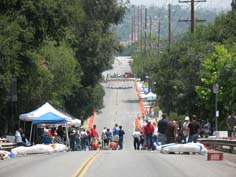 Registration and Weigh In

Drivers must register by filling out the race entry form and paying the entry fee at the registration table. Once all drivers are registered the race brackets are organized. This determines the competitors in each beginning heat. Then it’s time for last minute tuning and car prep.

All cars are weighed on official scales with the driver in the car.  Each division has different weight limits and restrictions on how much and where weight can be placed in the car.  The scale official will help make sure each car is weighed fairly.  Once cars are weighed in no further adjustments are permitted. 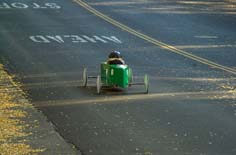 First time drivers are each given an opportunity to drive down the hill.  This first run gives them a chance to practice without having to worry about trying to win.  Once all the first time drivers have had their runs, we are ready to race! 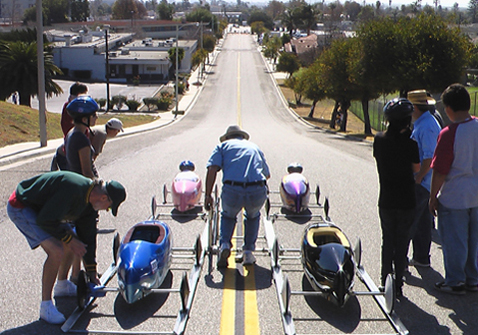 Each “heat” race consists of two “phases” or trips down the hill.  During a heat, each driver will race down the hill once in each lane– against the same opponent. “Wheel swaps” and “Lane swaps” are made between phases of each heat. The two cars exchange all four wheels being careful that each wheel goes to the same position on the other car. The two cars then switch lanes from the first phase. This eliminates the wheels and lane from being factors in who wins and insures that the driver and the car are the determining factors—with the driver being the biggest. One of the primary goals of soapbox derby racing is to give each driver an equal opportunity to win.

Once the race is concluded, everyone pitches in to break down the track equipment and load everything back into the equipment trailer. Once the work is done winners are announced and trophies are awarded.  Another day of racing has come to an end leaving a lifetime of memories for each participant.  Oftentimes, the racer’s and their families gather for a group dinner to extend their friendships and talk more about Soap Box Derby racing.